This page is an introduction to our projects, and shows some of the visualizations that we believe describe our data as a whole. The analyses presented here are only part of our overall project; we invite you to read read our paper if you are interested in the full in-depth analysis. 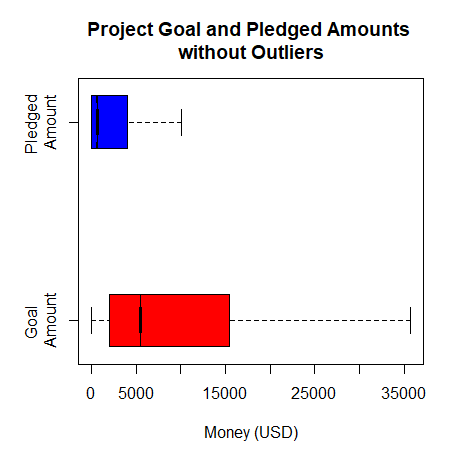 This project explores what a successful Kickstarter project looks like and how these traits could possibly be replicated in future projects.

In our paper, we explore many possible factors that could contribute to the success or failure of a Kickstarter project. These factors include category, year, country, the set goal, the words used in the blurb, and a few others. Please give it a read and good luck to all potential project creators out there! We hope we can help you!

Kickstarter divides projects up into a number of categories. Originally, creators were free to enter whatever they wanted for the category, but sometime between 2016 and 2018, they switched to a pre-defined set of categories, and existing projects with custom categories were assigned to one of the pre-defined ones.

Here, we look at the total of all the goal amounts for each category compared to the total amount of money pledged for that category. Generally, we see that categories that ask for more tend to get more, as we would expect, particularly Technology, which both asks for and receives far more than other categories.

Notably, we see two categories that get significantly more money for what they ask for compared to the others. These appear at the right of the scatterplot and are Design and Games. Note that this does not mean that they made significantly more than their goals. Despite being so far from the others, the total pledged amount is still fairly disparate from the total goal amount. There is no category where overall more money was pledged than the goal amount.

Our data runs from the year 2009 to the beginning of 2018, so we also performed some analyses across this time period. Here, we show the number of backers (that is, the count, not the amount they pledged) in each category.

Most categories show pretty quick growth in the early years of 2009 through 2013. From 2011 to 2012, several categories, notably games, experienced a large spike in backers along with the overall, but note that some categories remained fairly constant despite the big change in the platform's growth. 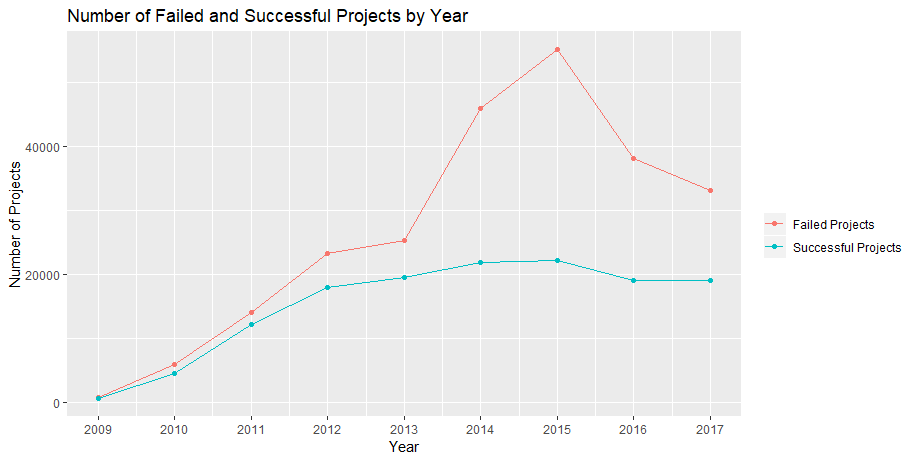 As we mentioned before, if you're interested in our full analysis, please check out our paper.